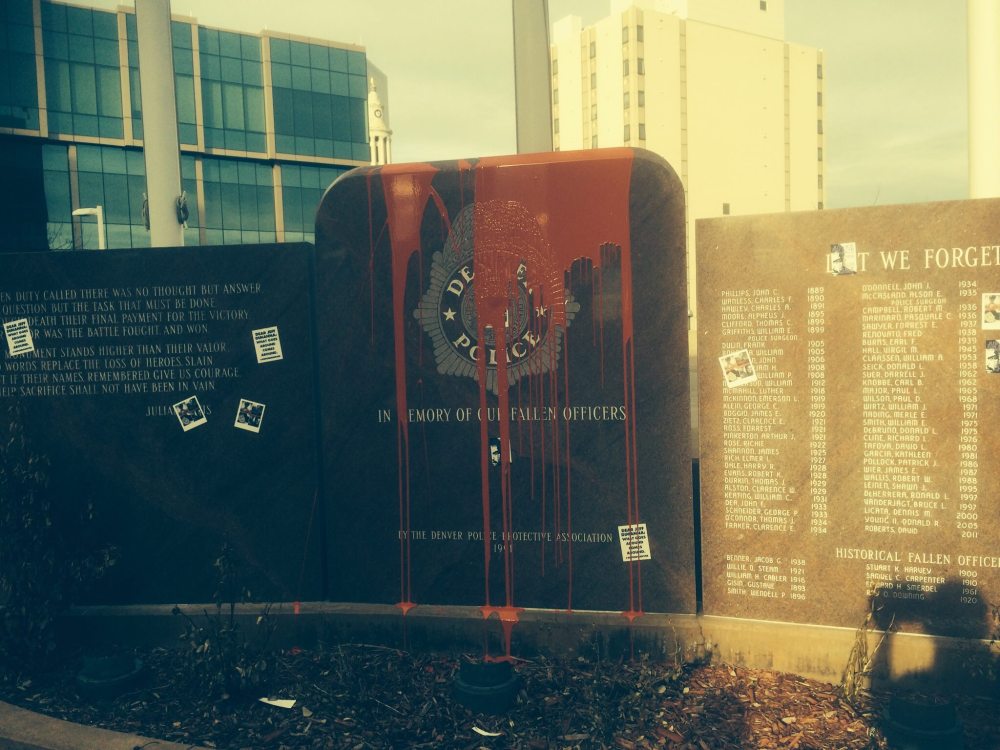 On Saturday February 14, over 300 people marched through the streets of Denver to show solidarity with families who have lost their loved ones or had their loved one’s lives threatened because of police violence.

When the March arrived at the Denver Police Headquarters, a bucket of paint was thrown by unknown March participants at a memorial to police officers who have been killed while in performance of their jobs. This single action has gained the most attention in the media, and has become a rallying call for Denver police and those who defend their actions.

We, as the members of the Denver Community Defense Committee, the organization that planned the March against Police Terror, voice our unwavering support and solidarity to all those who participated in the protests and March yesterday.

It is telling that at this moment, local media and the Denver Police Department are more offended over red paint being splashed on a piece of stone than the very real red blood that continues to stain our streets because of unchecked police violence. Although the paint was easily washed off the memorial, the scars left by police terror can never be washed away.

That a police department that stages raids to serve non-violent warrants on unarmed suspects during funerals, as was the case when police killed Ryan Ronquillo on July 2, 2014 outside the Romero Funeral Home during a funeral, would then complain about a small amount of paint on a piece of stone as “dis-honoring the dead” is beyond insulting.

That a police department that would handcuff, search, and then brutalize an already dead body as they did on January 26, 2015 after they killed 17 year old Jessie Hernandez, would denounce an act of non-violent protest as “disrespectful” is beyond sickening.

It is an act of extreme injustice that two people will face charges in court, accused of throwing paint on a piece of stone, and will face more jail time and harsher punishments than any police officer who has killed an unarmed suspect in this city. While two unarmed protesters will be prosecuted to the fullest extent of the law for an act of civil disobedience where no one was harmed, officers like Jeffrey DiManna, who has been involved in three cases of shooting unarmed suspects in the last seven months, will continue to patrol our streets without fear of any punishment whatsoever.

With these facts as the foundation for the situation we find ourselves facing within the city of Denver, how can anyone question why people would start to feel motivated to take bolder and more desperate actions against the institutions of police violence? The people of Denver have run out of cheeks to turn. We are being pushed into a corner by a system of police who murder with complete immunity, and the city officials and District Attorneys who do nothing to stem the flow of blood in our streets.